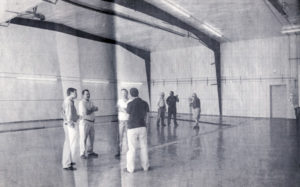 The public was invited to get a firsthand look at the city of Freeman’s new building used to house and service its fleet of vehicles and equipment at an open house Friday afternoon, Aug. 15.

The 60-foot x 100-foot metal building was erected this spring on city property located on the west side of Cedar Street.  The building, which faces south, is directly west of the structure that will continue to house the city’s garbage truck and northwest of the city’s recycling center.

The five-bay structure brings the city’s trucks and equipment into a central storage location; until now they have been stored at various locations around town, most of which are in serious repair.

“It’ll be nice to have everything in one area instead of four sheds,” said Duane Walters, who heads the city street department.

Walters said in addition to having all the vehicles and equipment in one location, having a service area and a heated facility will be a major improvement—particularly in winter.

The new building is divided into three areas.  The two bays on the west side are being used for cold storage.  The two bays to the east of that are the heated area and have a pit which will allow city workers to do maintenance on vehicles and equipment.  The bay on the east side, also heated, is equipped as a wash bay.

Walters said having a facility to do service and repairs is welcome.  AMPI has been very generous in allowing the city to use its service area for repairs, he said.  This will give the city more flexibility.  And, he said, it will also be available for servicing the fleets of the ambulance service and fire department.

The city has discussed the need for a new storage/maintenance building for several years.  At one point there was discussion about building it on the former Park Lane property at Juniper and Well.  But city officials concluded the area on the west side of Cedar offered significant more room and flexibility.

Bids for the project were awarded last fall.  Knodel Contracting did the ground preparation and Koerner Construction was the general contractor for the $372,245 project.

The project, which was thwarted by wet weather and areas of wet and spongy soil, was completed late last month.  An open house was held Aug. 15 to give the public a chance to see the facility.